There is a lot of information about who actually invented the game and even though the dates are sometimes conflicting, it is pretty clear as to who invented out game and how.

A stock-broker from Wall Street named Hayes Noel and a writer named Charles Gaines were debating who had better survival skills (this is something all men do in their spare time). Gaines was reading an agricultural magazine and came across a product called the Nel-Spot 007.  This gun was used by foresters for marking timber and by ranchers to mark cows.  It shot gelatin balls filled with oil based paint.

Noel, Gaines, and a friend named Bob Gurnsey planned a survival competition that would use the Nel-Spot 007.   On June 27, 1981, these three friends, along with 9 other people put themselves to the test in a 100 plus acre tract of woods in New Hampshire.  The goal was to capture flags from four different stations without being shot.

The winner of the first game was a man name Ritchie White, who supposedly never even fired a shot.  The word of this game spread and the three organizers of this game obtained a license from the Nelson Paint Company for all non-agricultural uses of the Nel-Spot 007.  This company, the National Survival Game, led us to the game we love to play today. 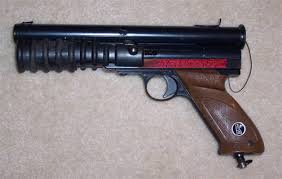